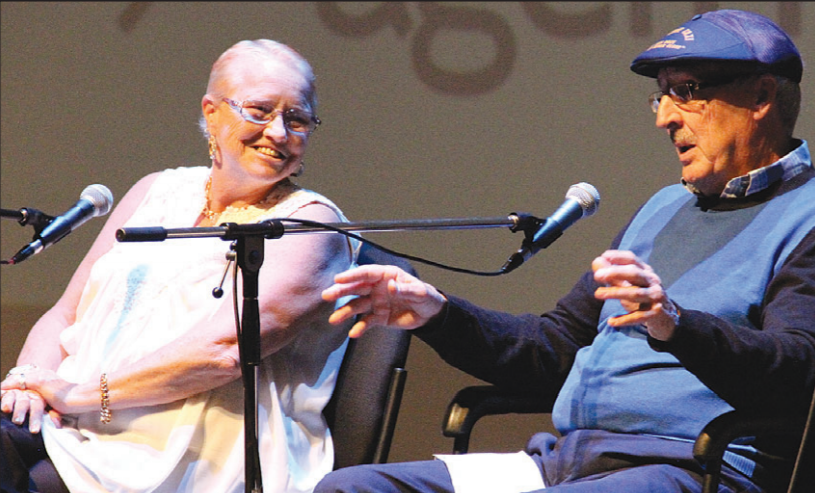 Her voice filled the darkened Magnus Theatre as still images moved across the screen illustrating the story she wanted to share about a book that inspired her in her youth and how it re-inspired her as an older adult.

Angus created the three-minute short during a three-day intensive workshop along with nine other seniors whose digital video stories were shown as part of a showcase by Age Friendly Thunder Bay at Magnus Theatre on Thursday.

“I was just a beginner and I was so amazed of what came out of it,” said Angus. “It was scary at the beginning and then after I became quite relaxed. It was fun.”

Angus was one of 10 seniors, ranging in age from 58 to 99, who participated in the Age Friendly Thunder Bay GIANTs project, an acronym for Grand Individuals Aging with Neighbours in Thunder Bay.

“Of all the projects I’ve been involved in over 30 years this has been one of my favourite projects ever,” said Nancy Angus, project lead. “When we saw the final results of what people had created in those three days we knew we wanted to share them with a bigger audience. Some of them are funny, a lot of them are thought provoking, and hopefully they create some kind of action in a positive way to get people talking.”

The project, made possible through a grant awarded to the city from the federal government’s New Horizon for Seniors Program, was a way to empower seniors to share their knowledge, skills and experience with others.

Project participant Arlene Vibert said she was really in the dark when she started the project having never done anything like it before but is not one to shy away from new things.

“Mine is about my neighbourhood,” said Vibert. “The world starts right outside your back door. You have to get out there and meet it face-to-face, meet your neighbours and enjoy the small things in life.”

The group of seniors worked with StoryCentre Canada to write and voice their scripts, and put the visuals together.

“I think in some ways we’d all like to redo our videos,” Vibert said with a laugh. “We have a different perspective from when we first started.”

Judy Mostow said it was overwhelming at first to learn about the technology involved.

“Using all the different things to do this project, it was fascinating to be able to figure this out and put it all together to make these movies,” said Mostow.

For Jaro Kotalik the experience was enriching.

“I find it amazing that by creating a video you have a chance to relive an experience and understand it better,” said Kotalik. “Things happen in life and you move on but suddenly you’re focusing on certain things in your life and you get a new understanding of that, a much better appreciation of it.”

Brian Spare said digital storytelling was something he had been interested in for a while and is something he would like to do again.

“It was quite a learning experience,” said Spare. “And I feel like I have a new family we all were in the workshop doing this and we became a family.”

The five other filmmakers were Nellie Murphy, Diana Plomp, John Cosgrove, Raziuddin Ahmad, and Lynn Strey. All but Strey were at the sold-out showcase at Magnus Theatre and took part in panels to talk about their shorts.

The summer’s final Live on the Waterfront concert was held Wednesday evening at Prince Arthur’s Landing. The popular series in Thunder Bay has completed nine weekly shows that began on July 13. Wednesday’s concert was unique as it was held one hour later in the evening to mesh with the 10 p.…